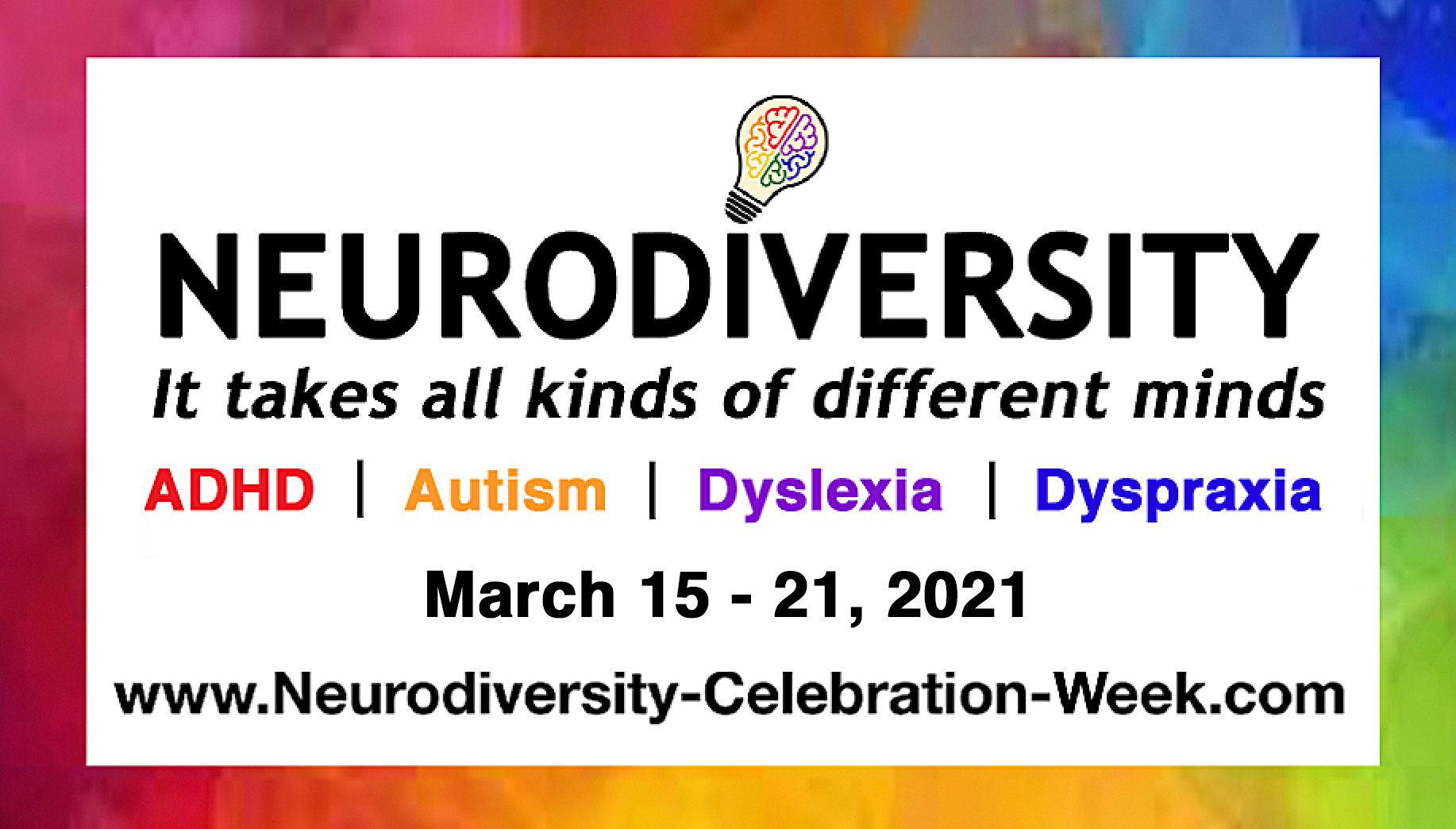 Neurodiversity Celebration Week is one of the most recent additions to the inclusion calendar of awareness dates. It was set up by Siena Castellon who is a young woman who is autistic, dyslexic, dyspraxic and has ADHD. The emphasis of the week is to "flip the narrative" on learning differences.

Rather than focusing on the challenges of being neurodiverse, which are often down to a lack of understanding from others or an inflexible education system this week hopes to raise awareness of all the advantages of thinking differently. The list of hugely successful individuals with ADHD, Dyslexia, Dyspraxia and Autism is long indeed and covers almost every aspect of human achievement from sport to art and science to literature. So let's use this week to celebrate neurodiversity and create a more inclusive, supporting and understanding environment for all.

Neurodiversity is a term that has been around for a while and is used to refer to differences in the way an individuals brain works without attaching negativity or positivity to it, simply identifying that there is a difference. When people use the term neurodiversity or neurodivergent it could be in reference to a wide range of discrete (and often overlapping) differences with labels such as Dyslexia, ADHD, Autistic Spectrum Condition to name just a few.

Neurodiversity, as a concept, presumes that such conditions are not "abnormal" but just different. This viewpoint takes into account the many benefits to individuals and society of brains which work differently and produce original thoughts.  So having a brain that works differently is not necessarily good, it's not necessarily bad, it's just different and sometimes being different is good. for example, Leonardo da Vinci was different, as was Mohamad Ali and Richard Branson has done things differently and it's worked out fairly well for him; the list of noteworthy proven or supposed neurodiverse individuals is very long indeed.

Neurodiversity is not just a politically correct term or "rebranding". It has a basis in science where numerous brain imaging studies have shown that the brains of those who have a learning difference actually work in different ways. So all of us are unique individuals and our brains are all unique, some are just a bit more different than others. So let's celebrate our differences and all the advantages they bring!

So how can you get involved? Well, for a start you can visit https://www.neurodiversity-celebration-week.com/ and register your school to show you plan to join the 1000+ schools around the world already participating.

The Neurodiversity Celebration Week website has a whole host of great resources which you can use to help improve understanding and celebrate neurodiversity.  We have included links to some of the best, as well as some others from LGfL and other organisations.

The Neurodiversity Awareness Week website - Collections of posters, videos, fact sheets on a wide range of neurodiversity. Make sure you hover over the "School Resources" button in the navigation to see a large drop-down list of resources.

IncludED In Your Classroom - Posters and web pages with practical tips about how to make your classroom as inclusive as possible including for dyslexic learners and learners who are autistic.

ADHD Foundation -  Lots of fact sheets, posters and other resources for schools and parents.

Neurodiversity Celebration Week is a great event to support for two main reasons:

The 26th of September is European Day of Languages. It aims to promote the rich linguistic...

The 26th of March each year is Purple Day. Purple day has been running since 2008 and was created...

Guest Blog written by the PSHE Association There are more opportunities than ever before for young...