Holocaust Memorial Day on Thursday 27th January; it is the day to remember the millions of people murdered in the Holocaust, under Nazi Persecution, and in the genocides which followed in Cambodia, Rwanda, Bosnia, and Darfur. This year the theme is One Day, there are many ways to interpret the theme, some of which are outlined on the Holocaust Memorial Day Trust's site.

'You didn’t think about yesterday, and tomorrow may not happen, it was only today that you had to cope with and you got through it as best you could'. Iby Knill, survivor of the Holocaust

Read on for a guest blog written by the Holocaust Explained Project Coordinator, Roxy Moore.

The Wiener Holocaust Library is the world’s oldest Holocaust archive and Britain’s largest collection of original archival material on the Nazi era and the Holocaust. 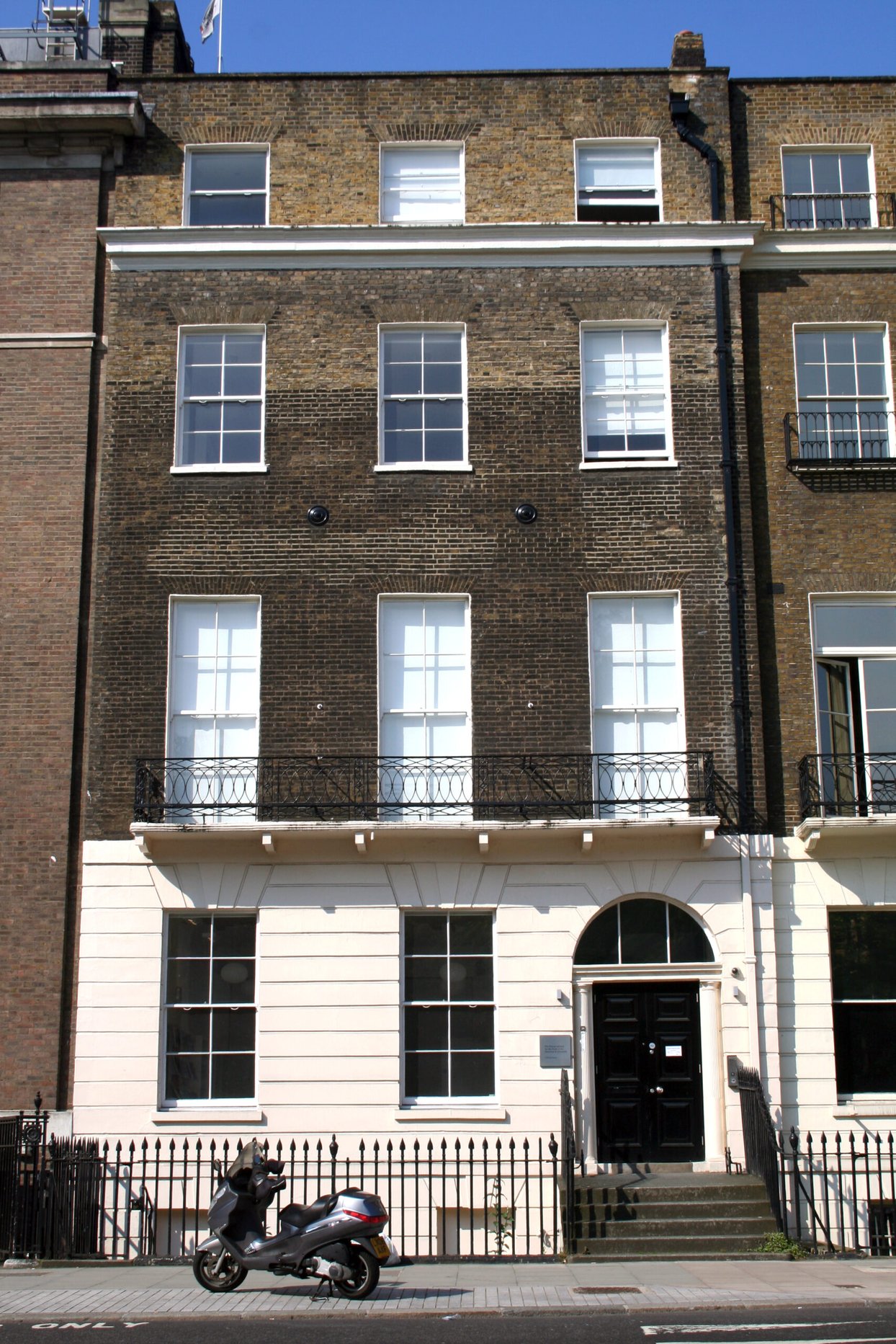 The Library was founded by Dr Alfred Wiener, who campaigned against Nazism during the 1920s and 1930s and gathered evidence about antisemitism and the persecution of Jews in Germany.

Following the Nazi rise to power in 1933, Dr Wiener, his wife Margarethe, and his three daughters, Ruth, Eva and Mirjam, fled Germany and settled in Amsterdam. Later that year Wiener set up the Jewish Central Information Office (JCIO) at the request of the Board of Deputies of British Jews and the Anglo-Jewish Association. This archive collected information about the Nazis to undermine their activities. 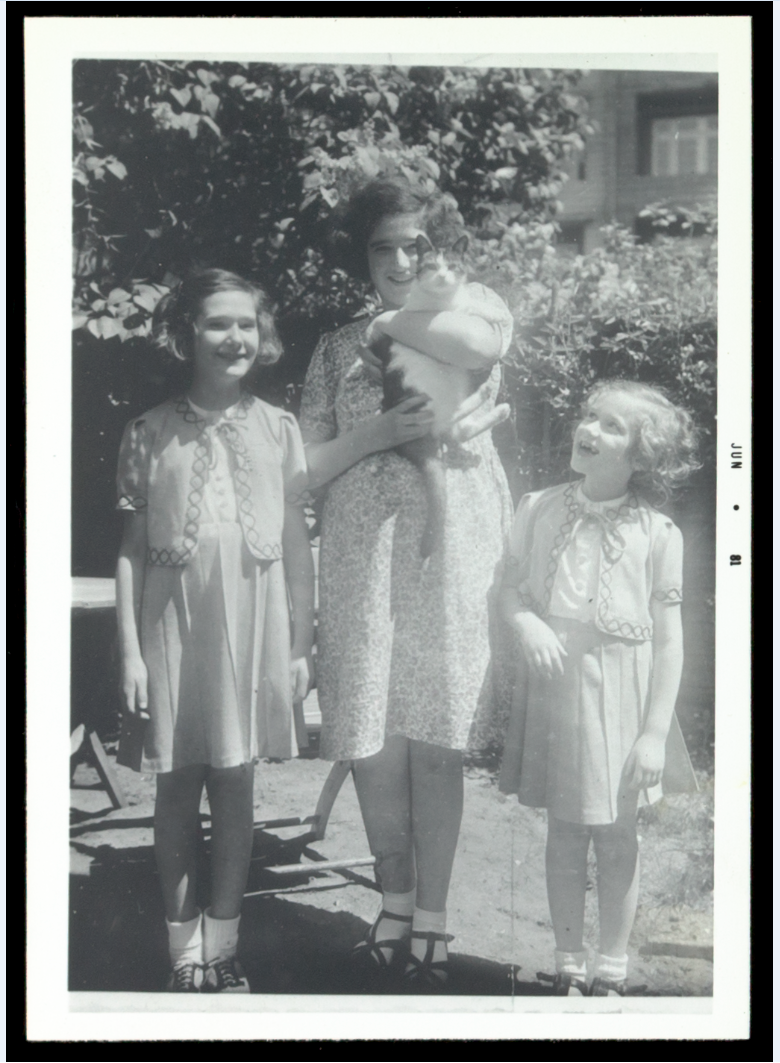 Following the November Pogrom of 1938 (also known as Kristallnacht), Wiener prepared to bring his collection to the UK. It arrived the following summer and is believed to have opened on the day the Nazis invaded Poland. Margarethe, Ruth, Eva and Mirjam were unable to join Wiener before the outbreak of war and became trapped in Holland. Following the Nazi invasion and occupation of Holland in May 1940, Margarethe, Ruth, Eva and Mirjam were imprisoned in Westerbork Transit Camp in 1943 before being deported to Bergen-Belsen in 1944. In January 1945, the Wiener family were selected for a rare prisoner exchange scheme and released from the camp. However, weakened from the poor conditions of Nazi incarceration, shortly after crossing the border into Switzerland Margarethe died. Following their mother’s death, Ruth, Eva and Mirjam made their way to New York, where they were finally reunited with their father.

In London, throughout the War, Wiener and the JCIO served the British Government as it fought the Nazi regime. Increasingly the collection was referred to as ‘Dr Wiener’s Library’ and eventually this led to its renaming. In the immediate postwar period, the Library assisted prosecutors at the Nuremberg War Crimes trials and undertook a pioneering project to collect survivor testimony.

Today, the Library aims to be a living memorial to the evils of the past by putting our wealth of unique and historic materials at the service of the future. We achieve this through being a centre of academic study with a free-to-access reading room, numerous digital resources, and an engaging programme of events, exhibitions and education. 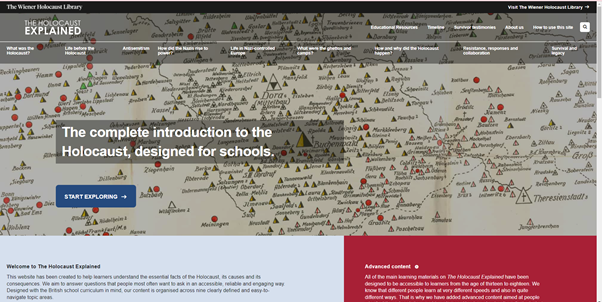 Image: The homepage of The Holocaust Explained.

Designed with the British curriculum in mind, the site helps learners to understand the causes, course and consequences of the Holocaust - answering the questions that students most often want to ask in an accessible, reliable and engaging way. The content is clearly organised across nine easy-to-navigate topic areas and utilises over five hundred unique items from the Library’s historic archive. 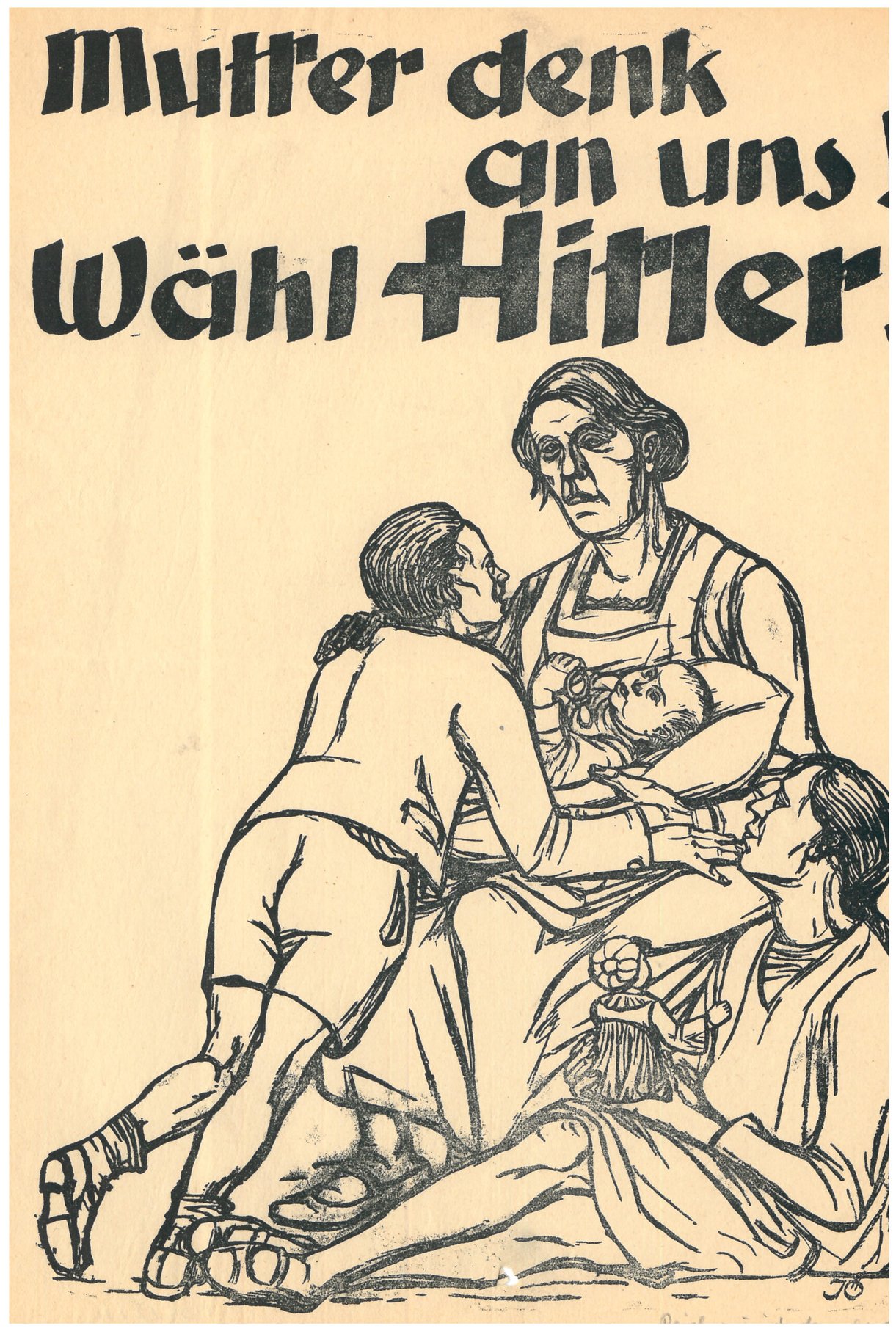 Image: An example of the unique documents showcased on The Holocaust Explained. This election poster was produced for the 1932 Reichspräsident elections, in which Hitler ran for President against President Hindenburg. The Wiener Holocaust Library Collections, 1405.

As well as the primary content on the site, there are also a number of additional features, including audio-visual survivor testimony, a timeline (which gives an overview of the key events in the Holocaust) and a glossary (which gives in-depth definitions of more than 1000 terms).

On the site, we also have a teacher-focused educational resources section which contains a range of downloadable lesson packs on relevant, curriculum-related topics, such as the British Response to the Holocaust, Jewish Resistance and the Nazi Rise To Power. Each resource features activities, contextual information, relevant primary sources and a glossary. On top of catering for those teachers who wish to undertake additional CPD through our workshop and events programme, we hope that these resources will alleviate pressure on teachers who are pressed for time, and support them to deliver high-quality, engaging lessons independently. 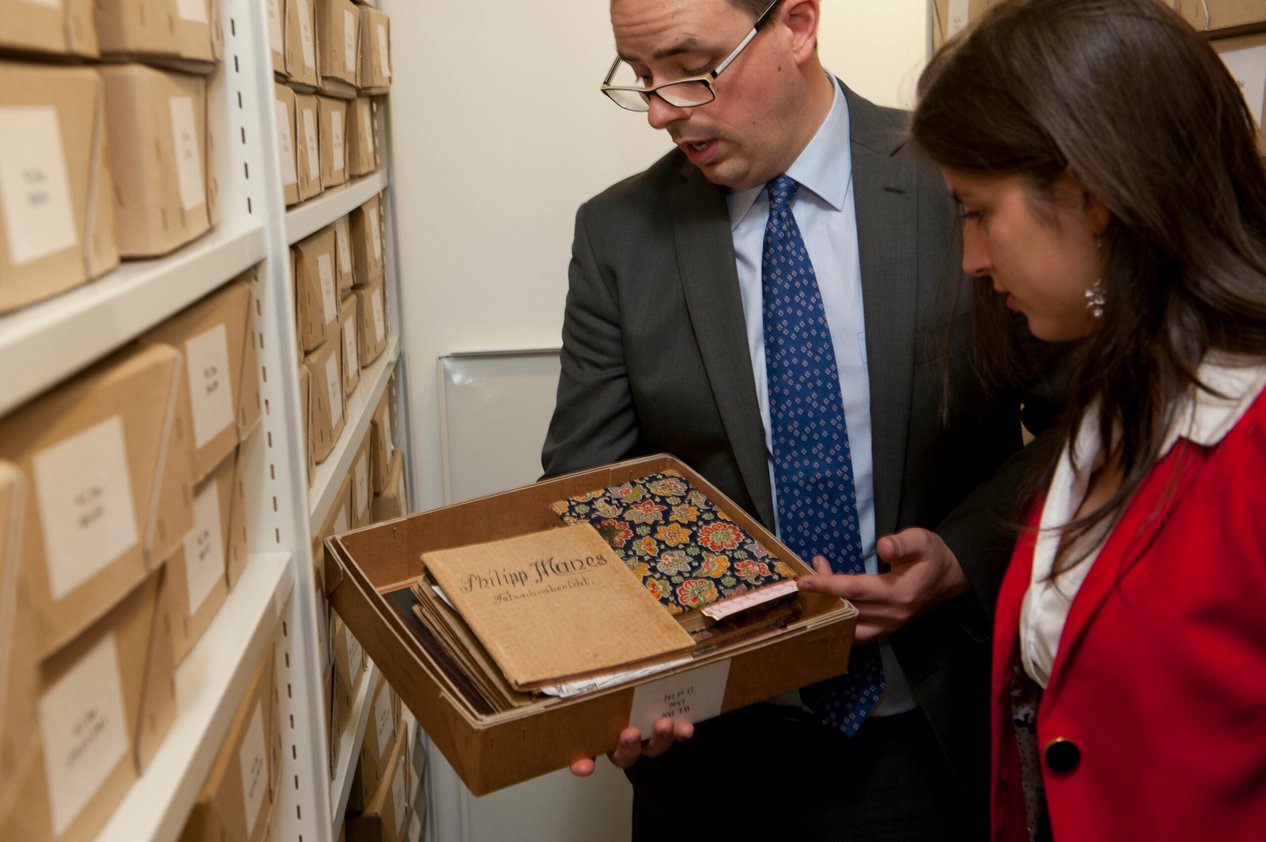 To explore the resources further on LGfL:

LGfL has produced a range of unique resources with partners to support the delivery of Holocaust Education these can be found here. 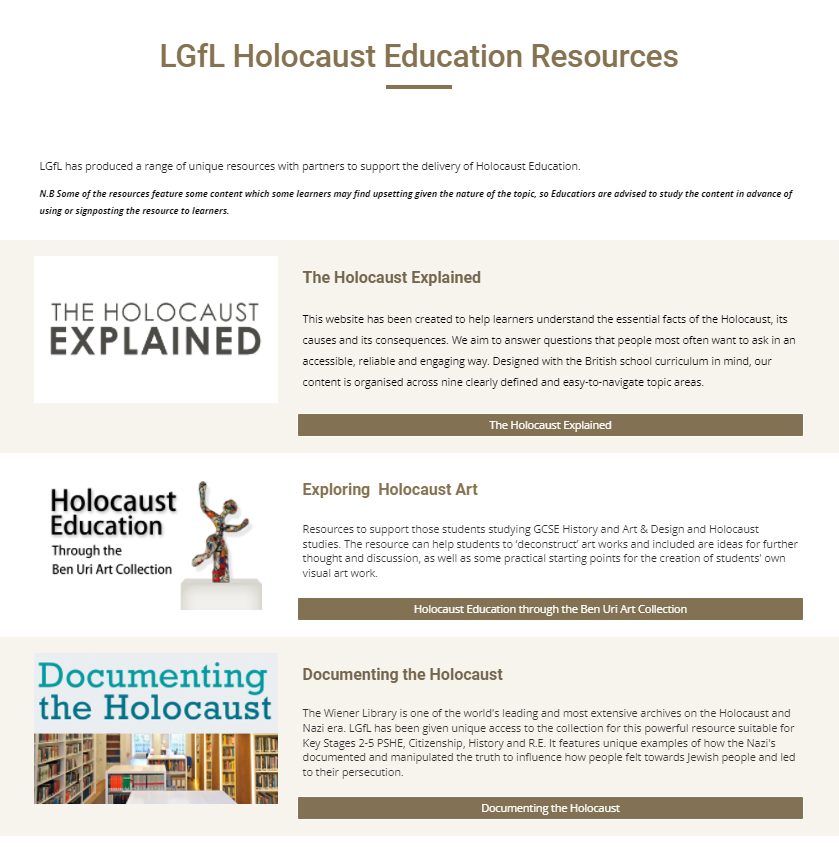 (N.B Some of the resources feature some content which some learners may find upsetting given the nature of the topic, so Educators are advised to study the content in advance of using or signposting the resource to learners).

The Holocaust Explained - created to help learners understand the essential facts of the Holocaust, its causes and its consequences. We aim to answer questions that people most often want to ask in an accessible, reliable and engaging way. Designed with the British school curriculum in mind, our content is organised across nine clearly defined and easy-to-navigate topic areas.

Exploring Holocaust Art - resources to support those students studying GCSE History and Art & Design and Holocaust studies. The resource can help students to ‘deconstruct’ art works and included are ideas for further thought and discussion, as well as some practical starting points for the creation of students' own visual art work.

Documenting the Holocaust - The Wiener Library is one of the world's leading and most extensive archives on the Holocaust and Nazi era. LGfL has been given unique access to the collection for this powerful resource suitable for Key Stages 2-5 PSHE, Citizenship, History and R.E. It features unique examples of how the Nazi's documented and manipulated the truth to influence how people felt towards Jewish people and led to their persecution.

The M-Room - Finding Out About Atrocities - LGfL's unique resource that features access to secret World War II listening sites where the British Secret Service bugged high-ranking German Military prisoners. It was through these discoveries that the British Government first heard of the Nazi mis-treatment and what became known as the Holocaust.

A personal Experience as a Kindertransportee - an amazing interview with a Kindertransportee, Bertha Leviton, filmed as part of the Barnet LA School Migration Project. The intereview captures the life story of such people and the expriences they lived through is an important part of the collective history in the UK. Many Kindertransportees ended up receiving widespread recogition for their subsequent achievements in Britain. These refugee contributions to British society resonate as much today as when the interview was first filmed in 2006.

Michael Morpurgo Interview Extract (on the home page) - Michael eloquently explains the lasting damage that war creates within families, communties and societies as a whole and why he writes about the theme so frequently in his books.

This guest post is written by Alan Fell, Project Senior Consultant for British Jews in the First...