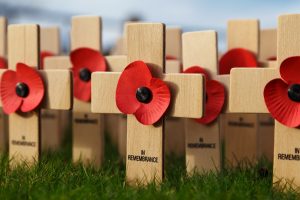 Armistice day or Remembrance Day is on the 11th November, it marks the day that World War 1 ended at 11 am on the 11th day, of the 11th month in 1918. Ceremonies are held at the Cenotaph in London as well as at War memorials and churches across the U.K. and overseas. A 2 minute silence is held to remember the people who have died in all wars - WW1, WW2, Falklands, Gulf war as well as the conflicts in Argentina and the Iraq.

King George V held the first 2 minute silence on 11 November 1919 and made the request for the silence to be observed so:

"thoughts of everyone may be concentrated on reverent remembrance of the glorious dead".

100 years ago the First World War ended, and a new world began. The example and experience of those who lived through it shaped the world we live in today. This year, The Royal British Legion is leading the nation in saying Thank You to all who served, sacrificed and changed our world. The video below explains more, there are six videos in total where you can find out more about the stories of people such as: Olive Edis, the first female war photographer, who worked for MI5, Marie Curie, who made x-rays mobile, Flora Sandes, who was the first female soldier, Eugent Clarke, who paid his own way from the Carribean to become and labourer, and Walter Tull, who was the first black soldier to become an officer. Watch the full videos here:

They have  partnered with the National Literacy Trust to create a series of downloadable lesson plans and teacher support materials that are free to use.  They have developed six sets of five lesson plans, two each for Key Stages 2, 3 and 4, accompanied by an assembly plan each for primary and secondary schools.

The lessons are planned to take place in the week leading up to Remembrance Sunday with each set of plans building to focus on an individual.  The week culminates in a lesson where children write a thank you letter to that individual, paying tribute to their huge contribution both during the war, and also for how they helped shape the world after the war ended.

You can download the lessons, resources and assembly plans here, and join in the conversation on Twitter using #THANKYOU100

There are many ways of remembering with pupils, for younger pupils Busy Things have a template poppy to paint, for older students they could make their own poppies - from hand prints and then use these to write poetry on.  In Flanders Fields and Ode to Remembrance are two poems that could be shared with older students, they could use copies of these to create their own 'black out poetry' this is when a page of text, is coloured over so that only a few words are visible, these words then create a new poem, great to get the children thinking about the choice of their words. Pupils could use J2E to research and write about the impact of the wars on their local community after perhaps visiting their local war memorial.

Our ReadingZone Live resource features Michael Morpurgo talking about Private Peaceful, there are 6 short interviews that can be watched and used as discussion points looking at why he wrote the book, discussing the conflict and the morality of war and what Michael would like people to take away after reading the book.  Into film also have a range of resources linked to the film adaptation of the book with resources linked to a range of curriculum subjects including Citizenship, English and History. 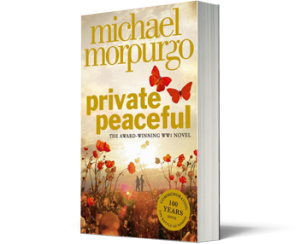 You can also listen to an abridged version of the story in 13 chapters via BBC School Radio (you will need to sign in to BBC iplayer to listen) there are programme notes, episode summaries, literacy activities and a gallery of images, like the one below great to use for writing and drama prompts.

Widgit - have a range of Activities and books on Remembrance Day as well as WW1 and WW2 to support learners in class.

First World War - The Active Worksheet was produced in response to the centenary of the outbreak of World War 1. The resource pack uses augmented reality to produce a genuine 'wow' moment in the classroom and bring virtual artefacts to the desktop. This is backed up by mapped curriculum activities focussing on history, literacy, music and art. 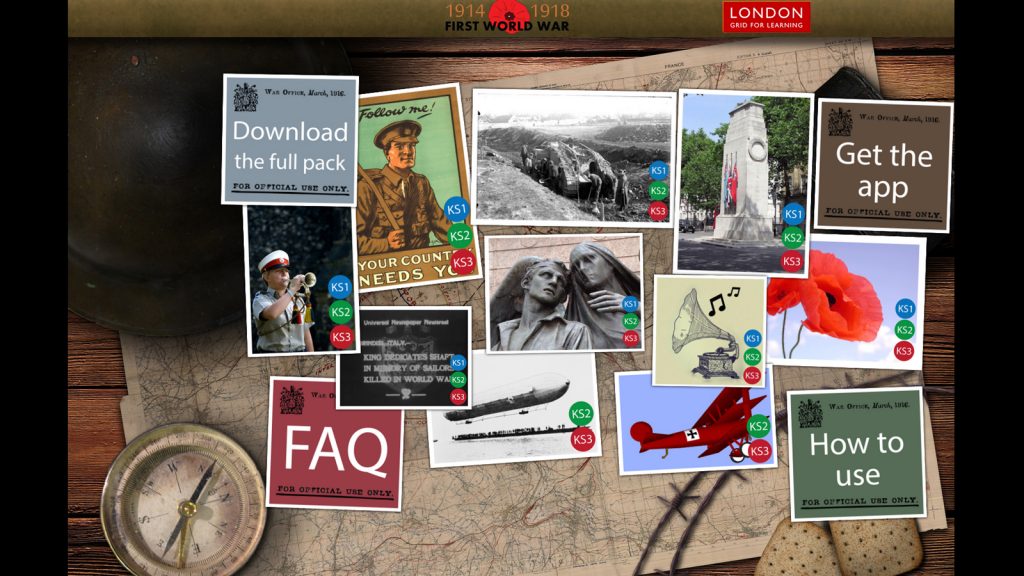 Passchendaele - Modern Foreign Languages resource pack - This pack has been published to commemorate the centenary of the Battle of Passchendaele which took place between July and November 1917. It enables teachers to explore the First World War in their classrooms whilst also developing modern language skills in their classroom through a series of creative, memorable and engaging activities. The pack is part of Passchendaele at Home – a nationwide research-and- remember project inviting schools and community groups across the UK to discover servicemen buried or commemorated in the UK who were wounded at the Battle of Passchendaele in 1917. Suitable for ages 7-14

World War 1 - This collection from BBC schools has a range of videos, activities and assemblies for both primary and secondary schools.

Poppies - is a beautiful animation from Cbeebies following a young rabbit through the poppy fields, great to use with younger children.

The Salvation Army - have a range of. resources to be used when looking at Remembrance Day these include, assemblies and presentations.

The author Tom Palmer has a range of resources available to use within the classroom all around the theme of remembrance, linked to books that he has written. Reading War, is an online resource packed with information on WW1 and exploring the themes of Over the Line by Tom Palmer and Tilly's Promise by Linda Newbery.

Trench experience - this innovative virtual-reality app from LGfL brings life in the trenches to life, and is ideal for History and English teachers covering World War 1 and trench life and warfare in general. 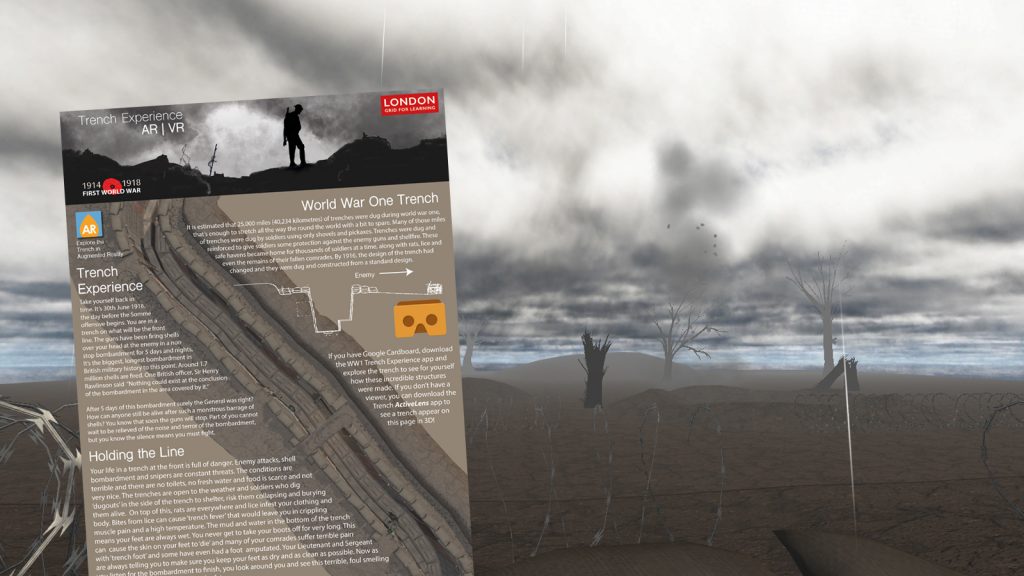 The M room -The M Room resource from LGfL gives exclusive access to secret World War II listening sites where the British Secret Service bugged high-ranking German Military prisoners. The resource features an interview with one of the original secret listeners and extensive primary-source material from the Ministry of Defence, relatives of those involved, and The National Archives. 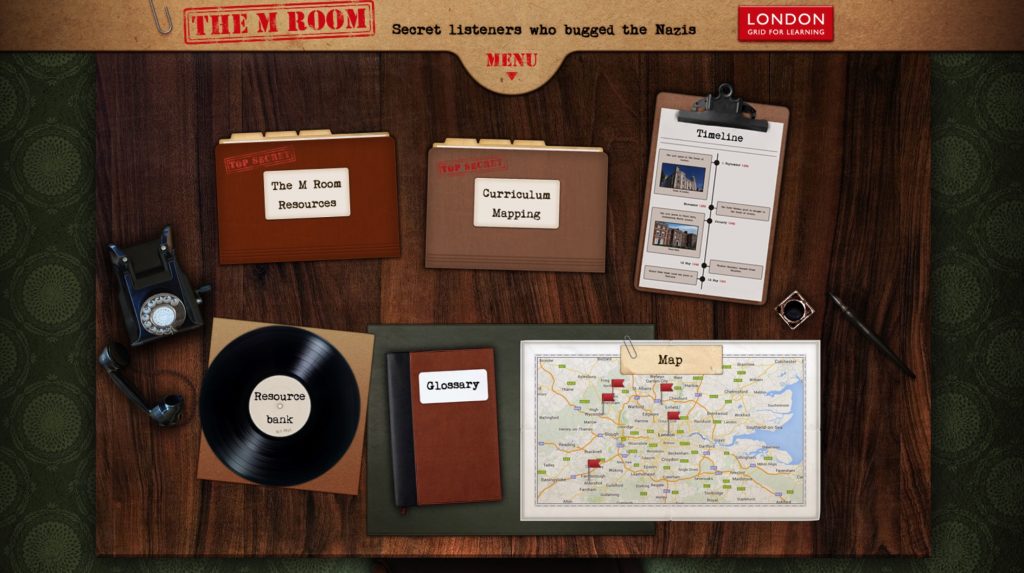 Women in computing -Women in Computing from LGfL aims to recognise and promote the achievements of women in British computing within the social context of the time. The work of women as code breakers during WW2 is one of the areas that is covered within this resource.

Activehistory - There are a collection of Remembrance Day materials here for Years 7- 13, including an assembly, put together by Russell Tarr.

The War and Peace shed from the Literacy Shed, has a range of short films that could be used when looking at the theme of Remembrance. There is also an excellent blog post from the Literacy Leader, including more book and film ideas and resources.

‘They shall grow not old, as we that are left grow old: Age shall not weary them, nor the years condemn. At the going down of the sun and in the morning We will remember them.’

What’s in a picture? Quite a lot in fact! And thanks to this collection of prints and  paintings...

Armistice day or Remembrance Day is on the 11th November, it marks the day that World War 1 ended...

Sigurd and the Dragon VR